It started off perfect—in August 1982, Tom and Sue McLean had just given birth to their firstborn, Jenny, in Kelowna. Just two hours later a nurse noticed Jenny’s lips turned blue and local doctors suspected a heart condition. That evening Jenny was flown to BC Children’s without her mom and dad.

“There really are no words to describe the fear and anxiety we were feeling, but we remained hopeful,” says Tom. “I remember her doctor telling me that she was on her way to the best hospital in the province for this kind of thing.” Sue and Tom caught the next flight out.

At BC Children’s, the experts diagnosed Jenny with tetralogy of Fallot, a rare heart condition. She had a hole between two chambers of her heart, and her pulmonary artery was narrowing—gravely limiting her ability to oxygenate her blood.

Next steps included a complex heart operation–to Tom and Sue, a terrifying prospect at first. “The surgeon told us that it’s a common surgery and they do over 300 of these heart operations every year and that was important to know,” says Tom. “Even 38 years later, I still get emotional talking about it. We feel so blessed to have a resource like BC Children’s.”

Throughout the rest of her childhood and into her teens, the McLeans would travel back to BC Children’s for check-ups and other surgeries, including a five-hour open-heart surgery when Jenny turned two years  old. She came through with flying colours, and just three days later was seen running around in the cardiac ward.

Today Jenny is a mother of two beautiful children, and Tom and Sue are eternally grateful for the care she received. Thinking of their grandkids and creating a healthier future for all, they chose to leave a gift in their Will to BC Children’s Hospital Foundation. 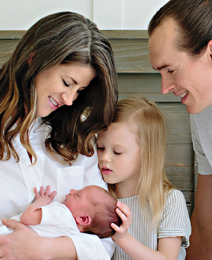 “Saving a child’s life is indeed a priceless gift and one that can hardly be ignored,” says Tom. “Our legacy gift serves as a deep, heartfelt thank you.”

Legacy giving provides more than health care to kids. It has the power to impact generations of children and their families. To learn more please visit bcchf.ca/legacy